This is my old roommate we are going to stay with him for the next month. Our flight to Tacna from Lima was a little rough. We were not able to land in Tacna due to wind shear so we had to go back to Arequipa and wait in the plane for two hours before we were able to get to Tacna. Today we are going to explore Tacna and probably head to chile tomorrow

The site has been down for a few days so I’ll try to play catch up by observations.

Yesterday Pam and I took the bus alone to Miraflores to play. We had a buffet at a high class restaurant then went to a casino, imagine that. Went shopping in an Inca market then home by buss. Today we went to a BIG shopping mall. WOW. Had to come to Peru to find such modern conveniences. They have escalators, for instance, that are built to take shopping carts on them. The stop lights here all have a large LED counter on them so you know how many seconds more it will stay that color. I kinda think its so you know how long before you get hit. If you close your eyes when riding in a car it will STILL scare the hell out of you. Tonight we went to Sucro and had a fantastic meal of Pisco Sours followed by Picarones ( Portuguese doughnuts or fritters) then Anticuchos ( skewers with large pieces of meat marinated and grilled. Wonderful. For three of us the cost was about $33.00  Gas is about the same price here. Maybe just a little more. Big plans for tomorrow. A visit to Pachcamac to see the ruins and maybe a trip to the museum of the inquisition. We never know for sure. Then we have to repack because Saturday morning we go to Chile..This truly is a great adventure. What the hell are you all waiting for. Your excuses don’t hold water. Go while you still can.. 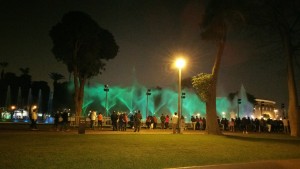 Lima, like many other cities in South America, has a law that requires people to give up their seats on public transport to people in “the third age”, pregnant, with infants or handicapped. A major difference is that they give up the seat with a smile. The law also says that those people do not wait in line but go to the head of the class. That’s right.. I am in my third age, over 60 or 65 depending, and the last bus on the way home tonight was way crowded and the line was quite long. We exercised that privilege and while I was a little nervous all the people in line were very cool with it. Turns out that while the line had maybe a hundred people in it only 4 of us were old or pregnant. I noticed this all day long. I had a lot of trouble finding old people or fat people like me. When I did find them they were usually old, fat and a tourist.
We started the day with a trip from Rafael’s house into downtown Lima.This was a trip of 1 and 1/2 hours involving a bus and then a train like bus. Lima is divided into districts, each with its own municipal government and sub culture. You go from the far outskirts, where things appear impoverished, into the center of town which is big business and quite modern. Then there’s the old town, resplendent with the presidential palace and many cathedrals and colonial buildings. We also went to the top of San Cristobal where you can look down in every direction at the city and at the same time see the hills and the ocean. Breath taking. After a Pisco Sour, they really haven’t discovered good beer yet, we decided to visit the “Magic Water Circuit”. This is an elaborate labyrinth of incredible themed fountains. There is a show at dark with Dancing Waters and little movies and lazer shows all done inside the fountain. There is another one that I swear reaches a good 50 ft up. Pam was so enthralled that she made me promise we would do it again before we leave Lima.We are going to the city center again to see the museums and other attractions. We probably walked a good two miles today and I have to give kudos to Pam. She has been a real trooper and an inspiration.
One more comment. Earlier I said that things “appeared” impoverished. There is indeed poverty evident but even more there is the environment. Many houses look fine on the first floor but the second stories are crumbling and or unfinished. There has been an unexpected abundance of rain over the last few years and that has wreaked havoc on the buildings. You don’t see people begging and lamenting their condition and the camaraderie
and kindness shown to strangers is very evident.

We were panick packing until 3 AM and had to leave for the airport by 4.. What took so long–43 years of marriage, which means I lose the argument. The origianal plan was for one backpack apiece. Last minute I find my self helping to vaccuum pack plastic bags full of clothes and stuffing them into two large suitcases.That means we now have 2 gigantic suitcases that weigh about 60 lbs each plus 2 large backpacks plus 2 cpap machine bags and a big ass purse. There is no way in hell im lugging that all over the continent ( unless she says so).
We had incredibly comfortable flights and made every connection with minutes to spare. Onboard movies were great. Its incredibly expensive to eat in airports but the food was great. We had Irish Coffees in the Buena Vista in SF along with a breakfast burrito we shared. In Houston we had a couple of fancy cocktails and shared a plate of crawfish etuffe and fried crawfish. Wonderful but the bill was 100.00 all together. In Houston there was a bar named the Local. Ill send pics later. That is the name of the bar that we frequented that I now fear must shut dowwn because we can no longer support it 🙂
Lima is a city of around 9 million people and is GIGANTIC. It took an hour by taxi to get to my friends house and I am told you can drive twice that and still be in lima. Today is a rest day- We still dont have any fixed plans but its time to start thinking about the trip to Machu Picchu in the next couple of weeks. I got a terrible cold the day before we left and I am consuming alcohol in an attempt to defeat it.
See you all in March…away we go…….

So its two and a half days to wheels up. We haven’t packed a thing. We are still in the process of packing up the house so the kids can take it over. I pray that we have all of the documents etc since we are going to have to do a rush job of packing. I just went and picked up our medications for the next six months. Looks like not much else is going to fit in the luggage. I have been working on getting the cell phones set up for international use. Gets complicated because of different network formats and roaming by country. I pay dearly, for instance, for voice and data in Peru but its almost free in Chile due to reciprocal agreements with Sprint.
I have not been in touch with my hosts for a couple of weeks and so hope we are met at the airport 🙂
I am a member of the Karuk tribe of Northern California. Pam and I go to the Potowat Health Village for medical care. We also have a native healer there. While I do not consider myself to be a spiritual person I do acknowledge that the only “spiritual” event I have experienced was standing in the center of the Taos Pueblo and feeling it was the center of the Universe. Well the native healer, Ruben Talaveras, told me in our last session that I am going on a journey of past lives. He says I have chosen to visit all of the archaeological ruins because I have been there before in previous lives. He says that is why I speak Spanish at the level I do. When people ask me how I came to speak that well I have always said that no one knows, it just happened. That would explain some of it anyway. After that session we were driving out of the clinic when a Great Blue Heron landed by the car. He followed us the whole way out. When we stopped he stopped. Strange..The time I spent as a scientist served to teach me more about how much we don’t know than how much we do. It is not my intention to fill this blog with mysticism but it seemed somewhat relevant to this journey. Now back to packing

My girlfriend of 50 years, who is also my wife of 42 years, and I are about to live the dream. It is a dream that has been delayed for 42 years while we raised kids and tended to life in general. I have had numerous careers including Salesman, Fisheries Biologist, Jeweler, High-Tech Call Center GM and finally Computer Repairman and Furniture Salesman. Unfortunately I forgot to make any money along the way so for the most part this dream will be fueled by Social Security 🙂
We were going to move directly to Cuenca Ecuador but saner heads prevailed and we have decided to make a six month discovery trip first. We leave on Sep 15th for Lima, Peru and return home from Guatemala City on the 15th of March. I graduated from a very specialized school at the University of the Pacific, Elbert Covell College, with a degree in Inter-American Relations. There were less than 400 of us that ever went through there and we are still very very connected these days. All of the classes I took there were taught in Spanish and most of the students were from Central and South America. Because of that I have friends in every Latin American Country and I am hoping to visit as many as I can. It is our intention to start in Peru then head to Chile and Argentina then back up to Ecuador and from there all of Central America. Seem like a lot to attempt? Hell yes, and we are going as 65 year old 18 year old hippies with only one back pack apiece for luggage 🙂
We are neither in great physical shape having both been grossly overweight and having recently been plagued by a few diseases that seem to accompany old age. We both, however, lost a ton of weight and worked out in the gym until recent events caused a slowdown and in my case I discovered beer and have gained a substantial amount of weight back. I am looking forward to a different lifestyle in Latin America and an upswing in health.
I am also the web master for www.covelianos.com if you would like to know more about us. I am doing this blog as a way to stay connected with all of my family and friends throughout the Americas and, perhaps, to let some people know that this is a possible thing to do and maybe inspire someone else to tackle an adventure
Craig and Pam Carothers